Every Kid Deserves a Ms. Kaune 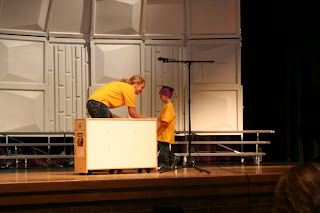 You can't hang out too long with me before you hear stories of my great nephew, whom I call Superman. Last year, Superman was in Kindergarten and he had a very special teacher, Ms. Kaune. The thing that amazed me about his teacher was the reverence with which he spoke of her. Every time I was with him and the subject of school came up, he would ask whomever was in the conversation with him if they knew Ms. Kaune. Just a few weeks ago (nearing the end of summer vacation) we were at a park and another slightly older boy came and started playing with us. Soon, the kid mentioned school, without hesitation, Superman said, "Do you know Ms. Kaune?"

Well, it might be good to know more about her, only I don't know much.  I know her impact on the life of that little boy was immeasurable. . I went to Kindergarten graduation and watched Ms. Kaune present her class with their diplomas. Kid after kid beamed as they walked across the stage and were presented their diploma by Ms. Kaune....and she was beaming too. Here is the thing about young children.....they know who the sincere people are, there is no faking that sort of happiness. Ms. Kaune obviously has genuine affection for her students and they return that.

Here is some information that I didn't see myself... I know when Superman missed school that Ms. Kaune made phone calls and sent emails inquiring where he was. Seemingly not in a punitive way, but out of genuine concern. She even called during the summer to ask how he was doing. She doesn't even have him anymore and he won't be in the same school. What an amazing educator and person! I have been a teacher for twenty-three years and her level of concern for students goes way above and beyond.

I arranged a very small token of appreciation for her...it was the least I could do. She took care of a most precious possession....and did more than the job required. She cared more than the minimum. She smiled a genuine smile and she apparently has a heart of gold.

So, when I was thinking about this, I determined that EVERY kid should have a Ms. Kaune. As I send my university class out in to the world of education, I always challenge them to be amazing. You see, I firmly believe that NO ONE launches into the world of education determined to treat kids with disrespect, or bore them to death with yellow handouts, or demean and demoralize them...  Every teacher, while they were sitting in a college class, knew they wanted to be good at what they did. The sad reality, which you know to be true, is that not everyone is a great teacher...in fact, there are some really bad ones. How did they get that way?

I doubt Ms. Kaune will ever read this...though I am going to send her a link to it. Because, we need to be appreciating the people who make a profound difference in the life of a child. We need to hold them up as an example. Heck, I would be willing to throw a parade! If your kid has a 'Ms. Kaune', send them a note...let them know they are appreciated. You and I both know they are VERY rare.

I believe it is easy to be lazy, complacent, and bad. In fact, being bad at teaching is a heck of a lot easier than be amazing. I bet Ms. Kaune falls into bed exhausted every night. BUT, aren't the kids worth our very best? Doesn't every kid deserve a Ms. Kaune?
Posted by TJ Shay at 10:08 AM

Ms. Kaune should see your post. Great teachers need to know they're appreciated by people other than the students they teach. Send her the link, but also send her a paper copy by snail mail; one is more likely to open an envelope addressed to one than a possibly dangerous link in an email.

Terry,
You are an amazing educator and advocate for great teachers. I agree... just as teachers do not set out to be "bad" or ineffective teachers.. Neither do parents set out to be "bad" or ineffective parents... As a society, we all need to take a little extra time to show we care... I hope Superman has another great year at school...His new teacher has big shoes to fill.