Help Me Change The World **Updated** 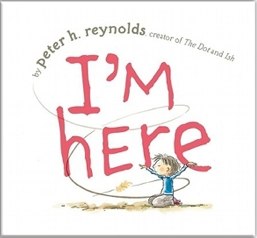 If you follow me on Twitter or are friends with me on Facebook, you know that I am a HUGE fan of the work of Peter H. Reynolds. In August, the book "I'm Here" debuted and I am completely blown away by that book. (Starred review from Kirkus!) The message of the book, originally intended to be about autism, speaks volumes to every person who reads it. I truly believe it belongs in every single school library in the country (and world). Since I don't have the $1,073,696.52 it would take to make that happen, I came up with this idea.

If you want to help me change the world, buy a copy of "I'm Here" and donate it to a local school. Send me an email (tjshay@gmail.com) and let me know your name and address, along with the name of the school that received the donation, and you will be in a drawing for a signed print by Peter H. Reynolds. If there is a tremendous response (I am praying for that), I will offer multiple prints.

Of course your local bookstore probably has this book, but if you want to make a double difference, you could purchase it from FableVision Learning! FVL is the company that Peter H and Paul Reynolds started to change the world. Their mission is to help all learners 'reach their true potential'. I do 'work' part-time for FableVision Learning leading an educator group, but I do not make any money from sales. In fact, the print is going to be from my personal money, because I believe in the message of the book and want kids to have it in their libraries. Purchasing things from FableVision Learning (and there are LOTS of awesome products) will be put back into their mission to create more wonderous things.

Until 12/31/11, purchases of $20 or more at FableVision Learning are 20% off with the code FabFall20, so if you want to purchase several books, you can save some money. Buy one for yourself, who doesn't need a powerful message of 'you are not alone' in your library. "The Dot" and "Ish" are awesome for kids to have in their life arsenal. If you buy from FableVision, email nicole@fablevisionlearning.com with your order and she will have the books signed by Peter!!

The more schools you buy for, the more chances you have to win. The drawing for the print will be around 12/31/11, but continue to help change the world as long as you are able!

**After reading about what I am doing with this event, Peter H. Reynolds tweeted this:

Now one person will win an ORIGINAL piece of art and another (or more) will win a print. I am blown away and thrilled by the response so far, please keep it going!!

This video will give you an idea of the book!

Friend or Follow: My Rules on Social Networking with Students

For as long as my Twitter stream is completely open, you may follow me and I may follow you back. Because everything that is posted on my Twitter account is open to the public, this seems appropriate as a way to have interaction. This type of communication would be similar to if I left a note for you on my classroom door. I will follow back anyone in chorus, and perhaps others with whom I have some sort of cordial relationship. IF the time comes that I choose to make my stream private, I will unfollow and block all students to avoid the look of inappropriateness. Nothing I have on my Twitter stream is inappropriate, but I may grow weary of blocking spammers, at which time, it would not be completely open.

Second, anything you post (in an open account) is visible to the entire world including me. Because I care about you enough to follow what you are saying on Twitter, I will also care enough about you to report any inappropriate behavior that you post. There will be no exceptions to this rule. If you post about a party, expect good conduct investigations at school. Please do not put me in this situation, though it won't be fun for me, I will follow through. Be aware that nothing on the Internet is private and it is not a good idea to post inappropriate behavior. Plus, the reason there are good conduct policies in the first place is to help you avoid things that could hurt you and your reputation.

You should not send me direct messages as I will not respond to them. That is the only non-publicly visible part of Twitter and I want to avoid any appearance of impropriety or favoritism.

If you are interested in 'friending' me on Facebook, you will have to wait until after you graduate. I have a very closed network on Facebook and have everything set to 'friend only', so it lacks the openness I would need to communicate with current students.

I love my job and my students. I enjoy the opportunities this provides for us to have a richer experience in the classroom. However, I wanted to make you aware of where I stand on some key issues.

My friend, Lee Kolbert (@teachakidd) was so inspired by a tweet from Dean Shareski that she wrote a blogpost . Dean wrote:

As soon as I read this, my mind raced back to the first time I met Lee in person, which I will get to later.  I first remember interacting with her on two of my blogposts in the very early days of blogging. The first one was my most popular post for a long time and it was about people describing where they were from and cultural differences. Lee made a very detailed comment about her area. That was June 24, 2008.

A few months later, I was whining on Twitter about the fact no one read my blog(and that is still basically true). I made a Blogpost about blogging and Lee made the very kind comment below:

Lee said...
Keep up the blogging and search to find your voice.

However, the thing that I look at as a watershed moment was meeting Lee in person at the Constructivist Consortium prior to ISTE (then NECC) in Washington, D.C. I am always a bit nervous about meeting people in person whom I have met online. I am afraid perhaps I won't be the person they think I am. I always thought of Lee as a celebrity on Twitter. Everyone knows her and loves her. I was more nervous than usual to meet her. What happened when I met Lee just blew me away. She gave me the warmest smile ever when she realized it was me and she hugged me. Every piece of nervousness I had ever had about meeting people I had 'met' online was gone. I now hug almost everyone I meet (so be forewarned). I am going to say it right now, I feel very lucky to have Lee in my Positive Loving Network. 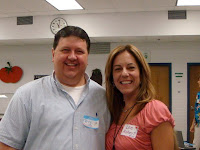 Before I attended ISTE in San Antonio, I was blasting away on Twitter about my time there and how I would be there with FableVision Learning. I received some extremely rude DM's from someone I was following and they were hurtful to me. I made some sort of comment about leaving Twitter (forever) and instantly received DM's and replies from Diane and Linda. They told me how they hated adult bullies and that I should just block the person and move on...that my voice mattered.

First of all, WOW, that was very sweet. Second of all, WOW, they were awesome. My life is definitely richer because of the relationships I continue to make on Twitter. I try to be 'that' person on Twitter too. . . When the resident bully starts bashing people, I try to talk to them and help them see their contribution is important.

I got to meet Diane in San Antonio and again in Philadelphia. I call her "The Great One" on Twitter because she is always there for people.

I followed Angela Maiers @angelamaiers for awhile on Twitter and then had the opportunity to meet her at ITEC two years ago. Her movement of #youmatter is such a wonderful thing and so important. You will see me tweeting that a lot!!

I interacted with Shannon Smith (@brachsmith) on Twitter after I made a very naughty joke. I tweeted "You know what it takes to be a principal? A Masters degree and two losing seasons." Fortunately, she has a very good sense of humor and she enjoyed the humor (maybe because she is married to @principalspage). I had the good fortune to meet her and her lovely mother @nbrach in Washington, D.C. (@principalspage was too scared to meet me-- he made some excuse about being busy).

Shannon Miller (@shannonmmiller) and John Schumacher (@MrSchuReads) are two people I met through Diane Cordell. They are two of the most positive and kind people in the world. These two are extra special to me because they helped International Dot Day participation explode this year!

I know I have connected with many other awesome Tweeters....but these are a few that made a huge mark on me.

Readers: I challenge you to write your own blog post doing the same. Be good to the Blogosphere and be sure to link back here and then challenge others to do the same and link back HERE and to YOUR POST. Leave me a comment letting me know that you've written your own blogpost about this please. Thanks!

In case you missed it above, Lee's original post is http://www.leekolbert.com/2011/12/have-we-met.html

Two weeks ago, I was sitting in a meeting and a colleague mentioned that she had accidentally received student teaching materials from one of my former students. I thought that was a strange coincidence, but what happened next was even stranger. The student had mentioned me in the materials. The colleague said that it was very complimentary, and I was moved. I was sitting in a completely useless meeting with tears in my eyes. The combination of knowing that I have given so much of my life and heart to was valuable to someone, combined with the complete random nature of me finding out was overwhelming.

As soon as I could get to Facebook, I messaged the student (I can't tell you how much I love that I can still be connected to former students) with my thanks. She offered to send me the personal reflection and I received that this week. I read the student's words and, although I sometimes feel I don't measure up to them, I was moved beyond words.

The same day I received a tweet from a very special former student after I had wish him a happy birthday on Twitter. Again, the kindness of the message blew me away.

I try to frequently touch base with former students via text message, tweet, or Facebook message. I admit I am a sappy idiot, but I want them to know I am proud of them and I am cheering them on (because I am). This week, that warmness came back to me exponentially. I am truly blessed to have the best students on earth.

I am convinced the greatest gift you can give the people that matter to you is the honest appreciation for their impact in your life....say it, write it, draw it....just let them know. I can't think of a better gift and, in this season of mass consumerism, it's free.

In the words of my dear friend Angela Maiers, let them know #you matter!