It seems like I am frequently telling old friends about my journey with FableVision and so I thought I would put the story on my long-neglected blog for all to read. If you know me, you know I never find the easy or most direct path to anything, so it is quite a story. You will notice there were some powerful forces at work during this story and many paths leading to one place.

It all started at the Iowa Technology Conference. I am not sure the year. I went to a session on the "Dana" which was an Alphasmart device that allowed the user to type into an inexpensive laptop-ish device and it would transfer into 'any' word processing software. The presenter was Arlene Steele, who at that time worked for AlphaSmart. She showed that the Dana could indeed transfer into any word processing software, including a program called, "Stationery Studio." Well, I sadly didn't win the software at the end of session drawing. I spent the next few hours stalking Arlene and trying to get the information about Stationery Studio. I eventually tracked her down and got the website. 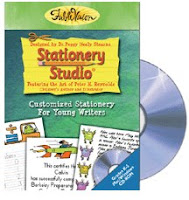 I called FableVision the very next day and was SO fortunate to land the amazing Bill Norris on the phone. Bill would send me the software. I now know I couldn't have possible reached a better person on the phone. Bill knows absolutely everyone and is a marvel in my life. When I have worked at conferences with Bill, I notice that he not only remembers every single name, he knows the persons 'story' and what is going on in their life. I love that about him. But, back to the story.

So, what was it about Stationery Studio that made me want to have it and share it? It's amazing K-5 writing software that immediately gave me ideas for how I could use it in MY classroom (music). It was designed by Dr. Peggy Healy Stearns (whom I had no knowledge of) and the art was by Peter H. Reynolds (also no knowledge). It was simply the best software I had seen. It was very cool looking, but it also had a ton of features I hadn't seen in other products. For example, you can change the wonderful artwork to great looking black-and-white with one click. No more ugly gray scale prints. It was amazing. Also, every design can be printed with two on a page, four on a page, and other choices, again with just one click. I showed it to my lower elementary teachers and they purchased it the next day.

A few months later, I got a letter in the mail from Aziza who was a very sweet person at FableVision. She asked if I wanted to be an "Ambassador"? Well, I already was! I had been telling everyone who even talked about software about this amazing discovery. So, I agreed. Later, I had more phone calls with Bill and suggested that he try to get Peter Reynolds to come to the Iowa Conference. In the mean time, I ordered the book "The Dot" and "The North Star".

I received a Christmas card from FableVision and it had the most wonderful little drawing on it by Peter Reynolds. A few months later, some very wonderful ladies gave the music department of my school ten thousand dollars. We decided to build a small composing lab and purchase keyboards. When dreaming of the mini-lab, I wanted a small logo I could put on the creations that developed from the lab. I remembered back to that Christmas card and that great little drawing. I called Bill and asked if it was possible....to my pleasant surprise, it was. At that time, I had NO idea the incredible amount of work that Peter does and would never have dreamed of imposing if I knew, but I blissfully waited for the time when it would arrive. Truth be told, I probably drove Bill nuts asking if it was going to happen....but I was SO excited when it came....and it was beautiful!

The books came and I was blown away. "The Dot" is the single best book for children and teachers to read....EVER! I think it should be required reading for future teachers. It is packed with valuable perspective and is wonderful. It speaks to the spirit of teaching. I soon found out that Peter H. Reynolds would be the keynote at the Iowa Technology Conference.

This is the part where you might shake your head in disgust at me....I researched Mr. Reynolds like crazy and found out that he had illustrated "Judy Moody" books and had his own website. I read and read every single page I could find. The overwhelming thought??? This guy can't be for real. In my time in education, I had grown a bit jaded. Well, ALL of those thoughts disappeared when Bill Norris and Peter H. Reynolds came to Iowa! They are both exactly who they say they are. They want to help all kids reach their true potential. The days were absolute magic and I was definitely under the spell. FableVision was going to be an important part of my life because it matched my view of kids and education....filled with hope and promise.

The next big event was being asked to go to Atlanta and work with the FableVision crew. I worked at the booth with the amazing Dawn (who has changed jobs, but is still a dear friend). I got to meet two more of the Reynolds family, Peter's twin brother Paul and sister, Jane. Both were so wonderful to me and treated me like a member of the team and family. I also met some wonderous people from Promethean, like Kathleen Tan, who would become very strong advocates for me. The big thrill of that trip was meeting Dr. Peggy Healy Stearns. Peggy, as you might recall, was the designer of "Stationery Studio." What a thrill!! Peggy is the sweetest and kindest person I know. She is a brilliant designer and I have been able to check out her other programs and they are all amazing. Oh, and after the session with Peggy, I got reacquainted with Arlene Steele!!! The person who introduced me to Stationery Studio.

While we were driving across town in a cab, Jane Reynolds was telling me about some software that was in development and was getting my reactions to it. A few months later, I was privileged to be on the Beta-testing team for "Animation-Ish". Even better than that, over Christmas break, I was asked to write some lesson plans. I could write five or ten....I was so thrilled and inspired, I wrote fifteen! Animation-Ish is a K-12 animation program that I have literally done with kids of all ages. It is easy enough for the little kids, yet powerful enough for high school kids (and adults! I love it!) 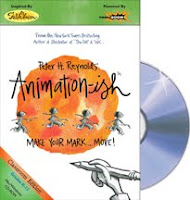 The next year the conference was in San Antonio and there was a slightly different crew. We were joined by the lovely Julia Young who is a very talented person and works in the Dedham office. I also had the wonderful thrill of being a guest in Dr. Peggy Healy Stearns' session. Wow! What a fun time that was! Animation-Ish was released just prior to this conference and it was an immediate hit! While packing up from the conference, Bill asked if I might be interested in leading the Ambassador group.... Wow, what a question! YES!

In early November I was named "Lead Ambassador" which meant I got to run the very program I had been a member of, which was a thrill. I have the extreme joy of working with the absolute best educators from around the country. I truly know nothing about sales, I only get to support the mission.

One of the greatest things I get to do is be on the team for new Stationery Studio add-on packs. FableVision is so great that when people suggest a new design pack, they research it and sometimes create them. "Sports and Exercise" and "Fairy Tales and Folktales" both were from teacher recommendations! They will truly give kids a reason to write!

The last national conference was in Washington D.C. and I again got to present with the amazing Dr. Peggy Healy Stearns and this time, Glen Bull. I worked in the booth with the amazing Bill and Julia and two mission sales specialists, Nicole and Ryan. An amazing team. I got to meet in person with a ton of wonderful people I have met online and it was great fun.

So, what are the big messages??
*If you have ever wondered why I spend so much time promoting FableVision and Peter Reynolds, you now have a glimpse.
*"The Dot" and "Ish" should be required reading for all teachers, students, and humans. "The North Star" is guaranteed to change your life.
*"Stationery Studio" is the best program you can get for K-5 writing and writers.
*Peter H. Reynolds is the real deal. There is NO better advocate for kids and education.
*If YOU haven't heard of Peggy Healy Stearns software, check it out.

**When you love something, get into it.....really into it. There is no greater joy than to do work that matches your heart.
Posted by TJ Shay at 4:19 PM

Glad your journey led to you FableVision, Terry - it's refreshing to know someone who truly loves his work! I hope you can come to the Studio sometime soon.